Instruments
Bansuri and Venu
Bansuri and venu are common Indian flutes.  They are typically made of bamboo or reed.  There are two varieties; transverse and fipple.  The transverse variety is nothing more than a length of bamboo with holes cut into it.  This is the preferred flute for classical music because the embouchure gives added flexibility and control.  The fipple variety is found in the folk and filmi styles, but seldom used for serious music.  This is usually considered to be just a toy because the absence of any embouchure limits the flexibility of the instrument.  The flute may be called many things in India: bansi, bansuri, murali, venu and many more.
There are two main types; bansuri and venu.  The bansuri is used in the North Indian system.  It typically has six holes, however there has been a tendency in recent years to use seven holes for added flexibility and correctness of pitch in the higher registers.  It was previously associated only with folk music, but today it is found in Hindustani classical, filmi, and numerous other genre.  Venu is the south Indian flute and is used in the Carnatic system.  It typically has eight holes.  The venu is very popular in all south Indian styles.
Cultural and Religious Significance
The bansuri is not just a musical instrument, because it has a great cultural and religious significance among Hindus.  It is an instrument associated with Lord Krishna.  Numerous common names reflect these epitaphs of Krishna.  Common examples are: Venugopal, Bansilal, Murali, Muralidhar, etc.  Furthermore, in traditional Indian metaphysics, it is noted how remarkable it is the way the life force (pran, or literally "breath") is converted into a musical resonance (sur).
Extracted from www.chandrakantha.com. Written by David Courtney.
Harmonium
The harmonium is also known as peti or baja.  This instrument is not a native Indian instrument.  It is a European instrument which was imported in the 19th century.  It is a reed organ with hand pumped bellows.  Although it is a relatively recent introduction, it has spread throughout the subcontinent.  Today, it is used in virtually every musical genre except the south Indian classical.
Extracted from www.chandrakantha.com. Written by David Courtney.
Sarangi
Regarded as one of the most ancient and difficult stringed instruments, Sarangi originated in North India. The name is derived from the word "Saurangi", which means "hundred-colored", describing its ability to convey a wide range of mood and emotion. There are as many as sixty variations of the instrument mae from  a hollowed piece of wood carved from a tree trunk. The resonator hole, where the strings are bowed, is covered with a piece of leather. It has three gut playing strings and no less than 36 steel sympathetic strings, all of which must be tuned according to the raag being played. The three playing strings are stopped with the cuticles of the left hand fingers, while the right hand bows at the bottom. Needless to say, intitial training of this instrument does require blood, sweat, and (sometimes) tears.
Traditionally, Sarangi has been relegated to the role of accompaniment in vocal music, due to its brilliant sonorous quality. Unfortunately, the recent introduction of the Harmonium (akin to the accordian), along with Sarangi's own rigorous physical demands, has made the instrument an endangered species.  Masters such as Pandit Ram Narayan, Ustad Sultan Khan, and Pandit Ramesh Misra have revived the status of Sarangi through unforgettably stirring and moving performances. The instrument can literally make one cry, smile, or hide.
Extracted from: www.icmcdfw.org/instruments.aspx
Sarod
Sarod is an instrument which is derived form the rabab.  It is not an ancient instrument, probably no more than 150-200 years old.  It is essentially a bass rabab.   It has a metal fingerboard with no frets.  The bridge rests on a taut membrane that covers the resonator.  The sarod has numerous strings, some of which are drone,  some are played, and some are sympathetic.   The approach to tuning is somewhat similar to the other stringed isntruments.   It is played with a pick made of coconut shell.
There are a number of artists who have excelled at this instrument, notably Amjad Ali Khan and Ali Akbar Khan.
From:  David Courtney, www.chandrakantha.com
Tabla
Tabla is the overall term for two drums, which are played as accompaniment to North Indian music and dance. The musician uses the base of the palm as well as the fingers to produce great variations in sounds.
The right hand drum is tuned to the tonic dominant or sub-dominant and is called technically called the tabla. The left-hand drum, called the Bayan (nasal "n"), acts as the base. Both the heads are designed from treated skin and are tightly stretched over the open ends. A small hammer is used to tune the Tabla and Bayan.
It is perhaps the most versatile of all percussion instruments. It is the most used instrument in any form of indian music, as an accompanying instrument for vocal and instrumental music, except carnatic classical and Dhrupad.
It is capable of producing a variety of tones, syllables, and rhythmic phrases which add a special charm to the music.
More info, see this essay on tabla: www.tyburhoe.com/tabla
Tamboura or Tanpura
The Tamboura is one of the most ancient instruments of India. It has four to six strings and comes in various sizes. The purpose of the Tamboura is to provide the essential drone effect in a sustained manner. Seemingly very simple to play, this instrument requires tremendous focus, control, and concentration in order to play, so that it will complement and not disturb the tonal structures and the interplay of notes of the melody (Raga).
1 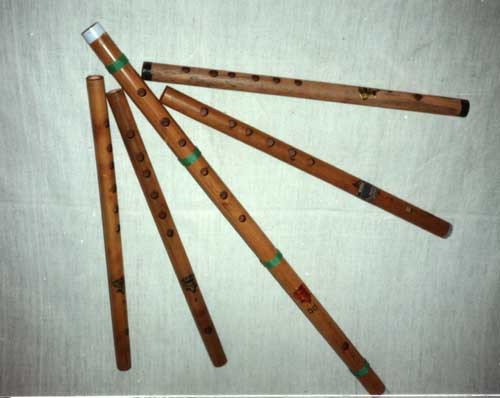 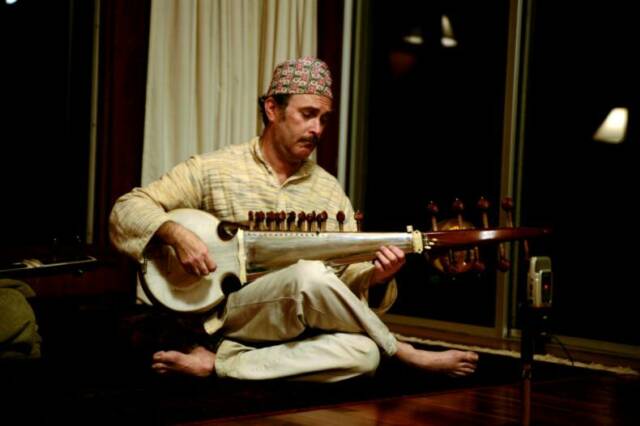